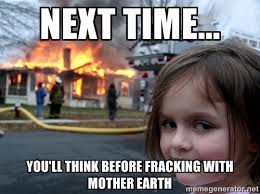 That is one word that most people are aware of, or have heard in conversations around them. It also appears that there are two strong beliefs when it comes to fracking. You are either against fracking, or support fracking. The people who argue against fracking tend to make the argument that fracking hurts the environment and the natural resources that are around it. On the other side, we have the the ones who make the argument that fracking does not hurt our environment and that it helps the economy of the state and of the locals where fracking is occurring.

What exactly is fracking? As a person who has only heard the arguments of the opposite sides, I decided to do my own investigation on fracking and where it stands right now in the state of Colorado. Fracking appears to be a simple task. You drill down down into the earth, then a high-pressure water mixture is released directed at the rock to release the gas that is inside the earth layers. The mixture is mixed with water, sand and chemicals that are put into the rock that causes them to “frack” and help release the gas out. 1

What’s controversial is that fracking uses huge amounts of water that must be transported to the sites. The chemicals used in the process of fracking can sometimes escape and contaminate groundwater that surrounds many of the sites and can create man-made earthquakes.1

In the United States, it is estimated that there is 827 trillion cubic feet of shale gas within reach that could last for decades to come2

It would make sense to start fracking to become easily more available to companies if they feel that it can help the US when it comes to energy. What many people also tend to argue is that this argument is taking away from companies setting their eyes to renewable energy like wind, water and solar.

When looking at fracking at the state level, it has been a hot topic that has been discussed for a few years. One only has to take a drive down I-70 or any of the backroads and frontage roads to see how fracking has made an impact in Western Colorado. Many of the companies that are coming into the state of Colorado are now feeling threatened by the communities and many of the grassroots organizations that are trying to ban and or introduce tougher regulations when it comes to fracking.

What is interesting is the amount of money that is being spent by many of these companies to help fight the implementation of tougher regulations. Protect Colorado is an organization that is funding a movement to help fight these tougher regulations. In the state of Colorado there are four ballot initiatives that are trying to collect enough signatures to put them on the ballot for election time in November. Ballot measures 40, 63, 75, and 78 would implement tougher regulations that would make it near impossible for the fracking companies to frack at a comfort level. Despite nine companies reporting a $3.1 billions lost in the first quarter of 2016, they have donated $6.3 million dollar to fund Protect Colorado and fight the ballots. 3

It is unbelievable to see that despite these companies taking huge losses, they still find time and money to donate money to help fracking and to fight the ballots that would hurt them the most. Fracking is something that we will be hearing about for years to come with only tougher battles to come.